Many long-lived organisms, including humans, can regenerate some adult tissues lost to physical injury or disease. Much of the previous research on mechanisms of regeneration has focused on adult stem cells, which give rise to new tissue necessary for the replacement of missing body parts. Here we report that apoptosis of differentiated cells complements stem cell division during regeneration in the planarian Schmidtea mediterranea. Specifically, we developed a whole-mount TUNEL assay that allowed us to document two dramatic increases in the rate of apoptosis following amputation of an initial localized response near the wound site and a subsequent systemic response that varies in magnitude depending on the type of fragment examined. The latter cell death response can be induced in uninjured organs, occurs in the absence of planarian stem cells, and can also be triggered by prolonged starvation. Taken together, our results implicate apoptosis in the restoration of proper anatomical scale and proportion through remodeling of existing tissues. We also report results from initial mechanistic studies of apoptosis in planarians, which revealed that a S. mediterranea homolog of the antiapoptotic gene BCL2 is required for cell survival in adult animals. We propose that apoptosis is a central mechanism working in concert with stem cell division to restore anatomical form and function during metazoan regeneration. 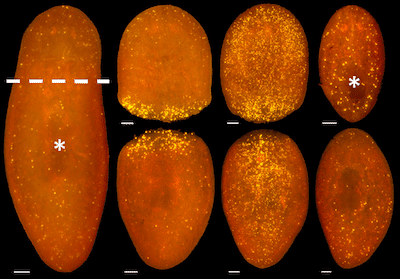