Regeneration, Stem Cells, and the Evolution of Tumor Suppression

All multicellular organisms have requirements for tumor suppression to regulate cellular proliferation during either embryonic development or adult life. However, different organisms have vastly different requirements. Adult tumor suppression is probably not crucial to organisms possessing both short life spans and largely postmitotic soma. In contrast, animals with lifelong tissue turnover or those capable of regenerating body parts lost to injury must possess evolutionarily selected mechanisms to control rates of cell proliferation such that tissue homeostasis can be maintained or restored after injury. We hypothesize that these biological differences may help to explain why the lists of tumor suppressor genes in humans and Drosophila are largely nonoverlapping. Here, we address this disparity by examining the tumor suppressor gene content of two outgroups to the vertebrates and flies/nematodes: the freshwater planarian and the single-celled choanoflagellate. Both of these organisms have recently had their genomes sequenced, giving us a first glimpse of which known tumor suppressor genes have been maintained during evolution. In addition, we attempt to resolve which genes may have had ancestral tumor suppressor function and which may have acquired this function de novo. 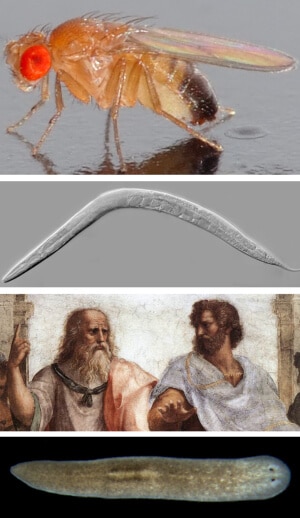